A Hill-Climbing 205 receives an Upgrade!

Improving both performance and reliability. A customer of our sister company M-Tech Automotive, Jason, is an avid hill-climb competitor, running a 205 GTi. He was plagued with issues with the stock distributor, and very poor performance (105bhp) from the 1.9 GTis stock injection system – with a budget in mind (that agreed with the wife!) he opted down the path of least resistance to gain power, and reliability – something that rarely goes hand-in-hand…

The car originally started as a standard 1.9 8V, EFI injection, with distributor based ignition system..

In this trim it made a rather poor, decidedly under-powered 105bhp, and also suffered troublesome starting, and distributor issues that often caused the car to underperform at many events. The objective was two-fold, the first was to increase power to make the car more competitive, and the second was to improve the cars reliability by replacing the distributor system with fully mappable electronic ignition management.

After considering the customers budget, and targets, we opted on running proven R1 Bike carburetors for fuel and air metering, and a NODIZ Pro for ignition management.

Fueling was taken car of firstly by the removal of the intank injection pump, inlet manifold and associated injection wiring and plumbing.

Next up came a Bogg Brothers intake manifold, sized for the R1 Carbs, which allowed a straight forward bolt on fitting of the carburetors to the engine,
A custom throttle linkage was created, to allow proper throttle cable connectivity and operation.

Next a standard ‘cube’ type facet lift pump was installed to deliver the much lower (3-4psi) of fuel pressure that the carbs required, compared to the 45-60psi of an injection system. Inline, a ‘Filter-King’ fuel pressure regulator was also fitted to further regulate the fuel supply to the carburetors.

Base settings were applied to the carbs to get the engine idling, although roughly, on the standard ignition management.

At this point the carbs were then tuned on the rolling road, and the distributor adjusted to achieve the best all round results, so we could gauge how the NODIZ would benefit.

With the fuelling taken care of, it was time to begin work on the ignition management. We knew there would be an obvious gain in torque, power and reliability compared to the standard ignition hardware, but another factor was the additional features the NODIZ Pro enabled, such as variable launch control and shift light output, which are crucial adages in any competitive motorsport.

Firstly, the distributor was removed and a blank fitted. Next up, the coil pack was mounted to the engine block securely, and new HT leads run.

The NODIZ Pro requires that a 36-1 or 60-2 crank trigger signal be presented to it. This 205 did not feature an OEM crank trigger, so a custom 36-1 trigger wheel was fitted to the engines crankshaft pulley, and a custom bracket made to support the crank sensor such that the NODIZ Pro could now accurately determine the engines position. You can see how this was done on another project, a Vauxhal Viva, here.

With that completed, all that was left was to click on the NODIZ Pro’s wiring loom, and mount the unit in the car.

Even with the supplied basemap the car felt better, but after an hours further tuning of the ignition on our rolling road, the following results were realised. Over a 13bhp gain in horsepower thanks to the NODIZ Pro, a 3rd in class, and a new PB by several seconds on the cars outing at Wiscombe the following weekend! 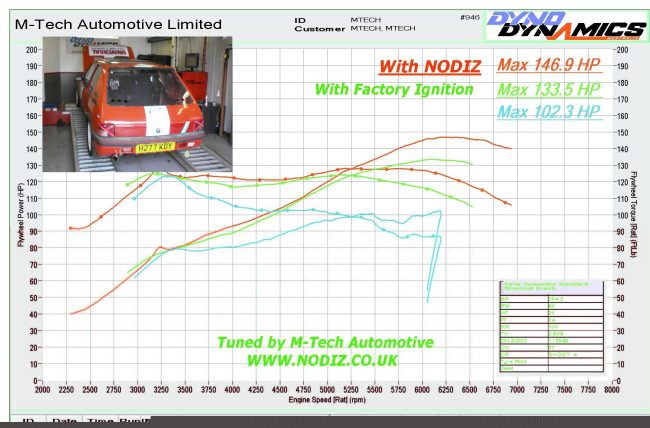 Even with the supplied basemap the car felt better, but after an hours further tuning of the ignition on our rolling road, the following results were realised. Over a 13bhp gain in horsepower thanks to the NODIZ Pro, a 3rd in class, and a new PB by several seconds on the cars outing at Wiscombe the following weekend!

For more information on Bike Carb Upgrades and tuning, see M-Tech Automotive’s website – or head over to the NODIZ Pro Ignition page to read more.